The Wise Judge and the Thieves- Story

On the appointed day, they were brought before the judge. The wise judge asked them about the complaint brought against them one by one but they all denied the charge. 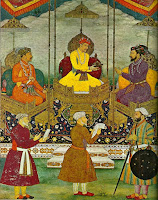 Then the judicious judge hit upon a plan to detect the real thief. He ordered to bring some sticks. Then he gave a stick to each and ordered them to submit the sticks the next day. He also disclosed that the stick of the real thief would increase by an inch throughout the night.
Returning home all the servant kept the sticks as they were. But the thief of the necklace did otherwise. Fear covered his mind and he shortened his stick by an inch so that he could submit the stick with exact length. The next day when all submitted their own sticks before the judge, the real thief was easily detected. Then he was given his due punishment. The wisdom of the judge, thus, solved such a cryptic problem.