The Old Farmer and the Lazy Sons- Story

Once there lived an old rich farmer in a village. He had four sons. The sons were strong but lazy and they did not work at all. They would like to pass their time in amusement. One day the farmer called his sons to his bed and said, “My sons, I’m very old and sick and soon I am going to die. But I’m rich and you can also be rich.” The sons became surprised, “Where are all of your riches?” they asked. “All my riches are hidden in my fields,” the man replied. A few days later, the farmer died. The sons were very sad. They were at a loss what to do. Days were passing by. They remembered their father’s words. They thought that there was gold in their fields. So they quickly began to dig the fields.
The four sons dug and dug. They dug all their fields. Yet they did not find any gold. They found nothing. At this the sons got very angry and threw away the seeds in the fields and went back home. After a few months, the sons were surprised. They saw that there were golden crops in the fields. Their joys knew no bound seeing the bumper crops in the fields. Now they realized what their father had meant by hidden riches. They also understood that industry is the key to success. 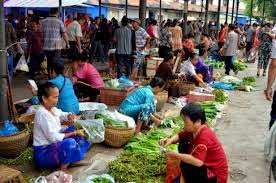