The National Memorial of Bangladesh is a famous monument which is built in remembrance of the freedom fighters who laid down their lives during the Liberation War of Bangladesh in 1971. It lies at Savar about 35 km north-west of the capital Dhaka and is one of the greatest and most magnificent tourist charms in Bangladesh. The monument is built with concrete but it signifies the nation’s respect for the martyrs of the War of Liberation. 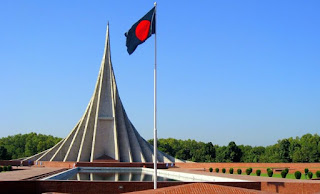 The monument complex is expanded over an area of 34 hectares in a nice smooth environment. The main structure of the monument is truly a series of seven towers that rise by stages to a height of 150 feet. Seven towers remind us of our seven ‘Bir Shreshthos’ of the liberation war. Other structures and sidewalks are made of red bricks which reminds us of the blood of the 3 million martyrs who sacrificed their blood only for the freedom of their dear motherland. Several graves of the martyred freedom fighters and a pool of water are located in front of the monument. The whole complex also includes a number of other structures with a museum. The monument was designed by Syed Mainul Hossain and was inaugurated on the 16th December 1982. Every year, on Independence Day (26 March) and the Victory Day (16 December), people of all walks of life go to the National Memorial to show reverence to the martyrs offering floral wreaths. Every day lots of people from home and abroad visit this monument which is the testimony of freedom at the cost of a river of blood.