I am fond of games and sports. Since my boyhood, I am passionate about different kinds of games like football, cricket, badminton, hockey and chess for which I am acclaimed by my friend circle as a good player. But my favorite game is football. I enjoy playing and watching the game of football than any other as my pastimes. I am also a member of our local football team.

Football is not our country game. This game emerged from England. But it has become more popular with all kinds of spectators than any of our country games too. There are many reasons why I prefer game of football to any other game. Firstly, I am greatly delighted and thrilled by it as it directly represents a battle between two rival teams resulting in attack, excitement, suspense, victory, or defeat. Secondly, it is not so time-consuming as cricket. As a result, every moment of this game is enjoyable. Moreover, it is neither a costly game nor is difficult one to understand. So all kinds of players and spectators—child or old, man or woman, educated or illiterate can enjoy game of football. 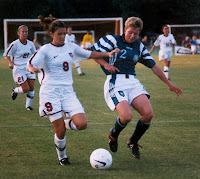 Football is played between two teams. each team consists of eleven players. All the players have to abide by the rules of the game strictly on following the whistle of the referee. Each team consists of one goal-keeper, three half-backs, two full-backs and five forwards. The goalkeeper and the two backs play defensively while five others lead the attack towards the opposite goal. The playground is 110 to 120 feet long by 70 to 90 feet wide. There are two goal posts at each of the two opposite ends of the field where two rival goalkeepers take their positions. A ball is placed at the center of the field. Upon whistle, the game starts. Each team tries at their best to push the ball into the net of the opponent. If any team succeeds to net the ball to the opponent’s goal, it is counted as one goal scored by that team. The team scoring more goals is declared to be the winner.

The duration of the game is ninety minutes which is divided into two equal halves with an interval of ten minutes. After first half ends, each team changes its side. If any player breaks discipline in the field, he is instantly penalized by the referee.

There are many benefits of this game. Practicing in this game covers the full exercise of the players. So, it builds up the body, makes the muscles strong, and makes the players physically fit. It provides great pleasure, enthusiasm, and recreation that also make the mind sound. Moreover, it teaches moral values and qualities like discipline, obedience, co-operation, fellow-feeling, punctuality, patience, and leadership. It also arouses universal brotherhood among the players and the spectators.
Despite so many merits, it has some drawbacks too. Unfair playing and foul may lead to a serious accident. The partial decision by the referee may cause bitter strife between the teams.

Football is played at a professional level all over the world. FIFA World Cup football championship creates great enthusiasm and excitement to millions of people around the world. I also eagerly wait for this international arrangement. Though I don’t aim to become a professional footballer, the game of football will remain a great source of joy although my life.