Climate change brings long-term changes in the earth’s atmosphere, particularly when the change occurs due to increase in the average temperature. Climate change may be caused by different factors such as biotic process, variation in solar radiation received by the earth, volcanic eruption, and so on. All these are a natural process. Human activities are also liable for climate change. And this is the reason which has lately become a matter of great concern all over the world. 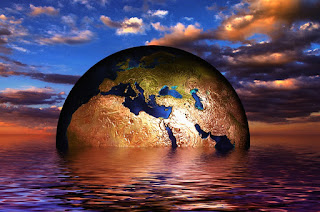 Man either with the continuous process of industrialization or urbanization or for his insensible activities is warming the globe and thus changing the climate of the earth. The main factor for climate change is greenhouse gases like carbon dioxide which are being produced worldwide by humans and are being released in the atmosphere. Again the main cause of the increase in carbon dioxide levels in the environment is the burning of fossil fuels. Since the end of the last century, industrial activities increased fast giving rise to many factories. These factories needed energy, which was produced through the combustion of coal. Besides coal, other sources of energy such as mineral oil or natural gas were also burned to warm houses, move cars and airplanes, or to produce electricity. Another important cause is deforestation by burning and cutting down trees that absorb carbon dioxide from the atmosphere. However, due to climate change frequent and untimely natural disasters like floods, cyclones, drought, tsunami, river erosion, sea level rising, etc. is noticed on the earth. As a result, the widespread impacts the world may encounter are flooding low lying coastal areas, decreasing land productivity, destroying biodiversity, and so on. Therefore, regulating greenhouse gas emissions to prevent climate change is the demand of time.