A Grocer and A Fruit Seller- Story 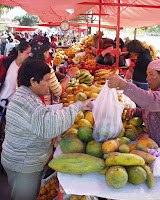 However, he hit upon a plan to teach the grocer a good lesson. Some days passed by. The fruit seller attempted to go to a nearby town to do some shopping. He requested the grocer to allow his son to go with him. The grocer did not disagree. The next day the fruit seller returned alone form the town. When the grocer asked him about his son, the reply from him (FS) was that a crow had carried his son away. At this, the grocer grew very angry and called him a liar. His question was how a crow could carry a boy away. The fruit seller instantly replied that it carried his son away in the same way as mice could eat into his balance and weights.
Now the grocer could easily understand what the man meant to say. He felt ashamed and returned the balance and weights to him. The fruit seller also gave the boy back to his father.